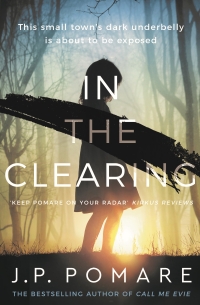 You never escape a cult. This chilling thriller is told from two points of view: Amy, a teenage member of a messianic cult, who is instrumental in the abduction of a young girl, and under the thrall of Adrienne, the cult mother.  And Freya, with the tragic background of having had one child taken from her due to her being suspected of hurting him, and now desperate to protect her second son, Billy.

In the Clearing is about the insidiousness of child abuse and how it can echo down through the generations.  The novel is set in a remote town in the Australian bush, where people keep to themselves and you never know what might be going on in your neighbourhood.  The atmosphere is tense and oppressive from the beginning, when we read in Amy’s diary of the abduction of the young girl who will be renamed Asha.  We then meet Freya, who is still traumatised by having had her first son, Aspen, taken from her.  She fakes her way through life: “I have to make myself cry to show them how upset I am”, she works as a yoga teacher, she visits a counsellor, and the only person she really trusts is Corazzo, an ex-cop who knows what she has been through.

When Freya hears a child has gone missing, that her ex is in town; when she comes across a young couple on her property, and a white van parked in her road, her anxiety levels go through the roof: “All problems out here in the country begin and end with dodgy vehicles parked in quiet streets.”  The story cleverly switches between the experiences of the children in the cult, and Freya’s increasing concerns that something will happen to Billy – her sections are titled with a countdown to an event, adding to the building tension.  Also building is the reader’s suspicions of who might be the guilty ones: Is Amy really telling the truth about the Clearing? Maybe Freya did hurt her first son, maybe she is still hurting Billy – she certainly has a temper.

Back at the cult, the control of the children is truly horrendous; toes cut off, hands crushed in doorframes.  And even more disturbing when you read it is based on descriptions of an actual cult. The reader wonders how some apparently respectable citizens have become such monsters.  “Now do you see how it feels to have that power over another creature?”, is that the key, is it the craving for power that has lead to the capture and abuse of the children, or a genuine devotion to the cult mother?: “Protect the Queen.”  The control of the children is complete, with warnings against “deviant thoughts.”  Can children ever really reclaim their lives after that level of abuse, ever learn to be honest after being frightened into lying for so long?

“Some snakes kill in this way, simply by squeezing; some snakes don’t bite at all,” In the Clearing is a roller coaster ride of trying to work out who is who and what is going on, and even when the reader gets an inkling, you are never really sure …  The writing is compelling and quite disturbing: “I take Asha’s hand and tenderly kiss the bruises and scratches from when she tried to hammer her way through the corrugated iron of the Shed.”  And the book is quite moving as well, despite the readers doubts about Freya, there are also her tangible concerns for Billy, and the book is backgrounded with the thoughts of the agony parents must go through when their children go missing.  An excellent thriller!