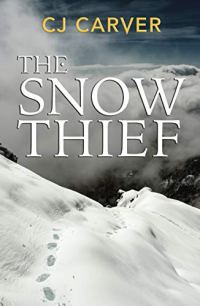 The snow thief is a murder mystery set in Tibet.  It is a book about reincarnation – of people across and throughout their lives, and of communities as they spread, come into conflict and change.

Shan Lia Bao, Police Supervisor Third Class, “knew her old life was over” when she lost most of her family and was sent to Tibet in disgrace, along with her grandmother-in-law, Fang Dongmei.  She is living in a blurry grey world of grief when she hears a young boy has been found dead with a broken neck.  As she begins to investigate, and links more and more similar deaths, she becomes convinced there is a serial killer at work.  A theory that makes her unpopular with her colleagues in the Ministry of Public Security, and even more so with the officials in the Public Security Bureau.

Shan knows “Not to trust anyone, least of all a fellow police officer”, and she finds the Tibetans a mystery, they eat oddly, drink oddly, live oddly, and observing a group of Buddhist pilgrims she finds it “hard to imagine a belief so strong you would suffer for it.”  In her previous life as a Police Supervisor First Class in Shenzhen, Shan accepted as routine police practices such as the torture of scapegoat prisoners, she and her husband Jian just longed for a future life in Australia, where “Sydney represented freedom.”  But she ended up in Tibet where, even though she knows it is impossible to tell who is corrupt and who might be on your side, she is just intent on keeping a balance and ensuring peace: “The last thing she wanted was the Tibetans to have an excuse to rampage through the city.”

As the story unfolds, Shan and the reader learn about the complexities of the Tibetan political situation and find that no one is really who or what they appear to be, on either side of the conflict.  Names change, even Shan finds she has a second name, allegiances change, everyone and everywhere is going through a series of incarnations.  The Tibetan buildings are falling apart, but so too are the hastily erected Chinese constructions.  As she becomes more aware of her crumbling surroundings, and gets drawn further into uncovering a conspiracy, Shan notices the anomaly of having a Tibetan quarter in Lhasa and finds “for the first time she could see why some Tibetans hated the Chinese so much.”

A compelling dimension of the story is the active role that absent characters play: Shan’s agonising memories of her dead husband Jian, the palpable presence of a dead Abbot for one of the young boys, Tashi, the Dalai Lama’s supreme influence on the Tibetans from his exile in India, the overwhelming influence of ‘Beijing’ on the Chinese officials.  This all adds to the complexities of the events happening in the ‘here and now.’  When Shan picks up clues about a long trek of a group of Lamas, and discovers their route matches the locations of the bodies of the murdered boys, she is nonplussed.

The extreme beauty and challenges of the Tibetan land is artfully portrayed, the “Thousand, millions, trillions” of stars, the agonising cold, the treacherous paths and deep, deep snow, the air “crisp and clear as crystal”.  Gradually Shan emerges from the pain of her experiences and finds something she is willing to suffer for.  And Shan’s is not the only transforming character; the head of the dreaded PBS, Tan Dao, is a monster who feeds stray dogs and saves stray children, and who discovers his own reason for transformation and self-sacrifice.

The snow thief reminded me of the lovely Inspector Shan Tao Yun series by Eliot Pattison, similarly set in Tibet and with a disgraced ex-Chinese policeman solving the cases, and similar regarding the complexities of the Chinese/Tibetan conflict.  The snow thief is less partisan, there are embedded monks, lineages from the time of the Dalai Lama’s flight in 1959, there are Chinese Guanxi networks that can work in your favour, or the opposite.  At one stage as Shan Lia flies over the Tibetan Plateau she looks for sign of the scores of Chinese mines that are supposed to be polluting the air; and finds nothing – wondering if the rumours are true.  And Tan strongly thinks the Western media is biased and unfair in its portrayal of the Chinese in Tibet: believing “Westerners had a Tibet complex.”

Shan is a sympathetic detective, not through ideological sympathy, but through having experienced unravelling grief.  She understands the motives behind activism, that “Tibetans, their culture, their beliefs and spiritualism, were about to be annihilated”, but this is not what motivates her, she just wants to find a way to prevent violence and bloodshed.  She does think about reincarnation one night, and wonders if you are reincarnated in order to get to see someone else’s point of view, she wonders about a young man whose life she ruined during her life in Shenzhen, but then decides she doesn’t understand it at all and turns on the TV.

There is plenty of action in The snow thief ; Shan falling of mountainsides, being attacked in monasteries, but it is the endless insecurity of who to trust, and not knowing what is going on, that keeps the tension high, that and the wonderfully complex characters.  The snow thief is a moving and compelling read, maybe Shan Lia will be back one day?