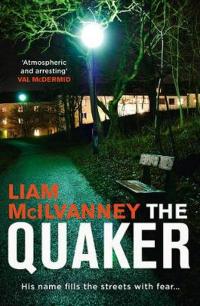 ‘The Quaker’ is the nickname given to a serial killer who has taken three female lives, ruined families, stymied the police, and terrorised a city.  The city in question is the “disintegrating city” of Glasgow in the late 1960s, and the prevailing culture of male prejudice, misogyny and corruption has been complicit in ‘The Quaker’ getting away with his crimes.

The character of ‘The Quaker’ is based on the real life, and still unidentified, serial killer ‘Bible John’, who killed three women after they had been dancing at Glasgow’s Barrowland Ballroom.  In The Quaker, McIlvanney sends DI Duncan McCormack in some time after the murders, to write a report on the team who have failed to identify ‘The Quaker’, with a view to closing down the investigation.

McCormack is despised by the demoralised team, and initially more interested in getting back to his mission of bringing down the city’s gangster king pin, John McGlashan.  But as the book progresses, McCormack finds that McGlashan has been replaced by ‘The Quaker’ in his mental priorities.  And when ‘The Quaker’ strikes again and a man who McCormack considers the wrong man is taken into custody, he starts investigating the murders with vigour.

A breakthrough comes when McCormack considers the victims as persons with agendas, rather than objects for male adoration, disparagement or use, people who might talk about other things than their boyfriends “You’d like that, wouldn’t you? That’s all we’ve got to talk about.”  And when he realises his own shame: “And now we’d done the same, thought McCormack. None of us brave enough to look her in the face.”

A parallel storyline in The Quaker is provided by Alex Paton, a ‘peterman’ or safe cracker, who returns to Glasgow from London for a job and ends up embroiled in ‘The Quaker’ inquiry.  He provides some delightful passages, such as his realisation “… he was happier than he’d been in months” when on the run in the highlands, or his nostalgic wishing that Glasgow was still the city it was when he was 19, but: “There was no train that could carry you back to last week, never mind 1959.”

The Quaker is a sprawling novel, with McCormack grasping for understanding: “Who said it was a pattern?”, with thoughts flickering at the edge of his mind, wondering if he is right in considering “Murder as a work of art. A species of code.”  At one point he realises he has been reminded of prehistoric ‘bog people’ when looking at the photograph of one of the victims, people whose deaths historians weren’t sure were “murders, executions, or ceremonial killings.”

And that is one hell of a question. The Quaker is a work of fiction, so we get the Who and the How of the mystery in the end. But Why do men murder women in such horrible ways?  Why are men ashamed when their wives and girlfriends intrude into their domains, as the police are at a farewell function in the novel?  In The Quaker, we only hear women’s voices when they are dead; through the investigation their voices are seen as a distraction from the solid information a man might be able to provide.  And victims, women who are wives and mothers, are dismissed: “They were Magdelenes, officer. Women of low morals.”

As I started reading The Quaker, I was appalled and angry, and then I began to realise the “disintegrating city” was being depicted as an organism, a sick organism where a few powerful males are dictating the terms of belonging, resulting in the police being more interested in results than the truth, and all the blokes trying to safely fly under the radar, be “one of the lads.”  McCormack is no exception, he knows what it’s like to have to hide the truth to be accepted, but he does develop as the novel progresses.

The Quaker is a complex and disturbing read and extremely atmospheric: full of Scottish terminology, abandoned tenements and middens.  The plotting is skillful and it has a satisfying ending, and is a novel that will haunt me for some time to come. Towards the end McCormack comes out with the saddest line in the book: “And the woman? I don’t even know her name. Do you even know her name?”