Posted on August 9, 2018 by alysonebaker 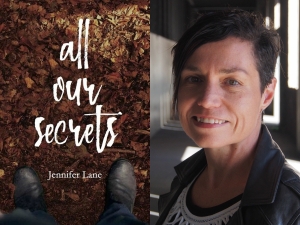 All was going pretty OK in the small town of Coongahoola, NSW, but then Gracie’s Dad moved out, the Believers arrived, and one by one the River Children started disappearing.

Coongahoola is home to 11-year-old Gracie, who lives with her Grandma Bett, her Mum, her philandering Dad, brother Elijah and infant twins Lucky and Grub.  The town’s only claim to fame is a notorious River Picnic held some years before All our secrets starts. Nine months after the picnic, a cluster of River Children were born, including Elijah, and many of these children don’t resemble the fathers they live with.

The River Picnic was down by the Bagooli River, which is where Martha Mills saw a vision of the Virgin Mary, and that’s what brought members of The Believers cult to Coongahoola. And when the River Children start to go, one by one, Saint Bede, the cult leader, falls under suspicion.  So Gracie is mortified when, after her Dad moves out to live with “Fat Frannie”, her Mum takes up with the cult and gets friendly with Saint Bede, making Gracie a pariah at her school – despite her, her Dad and her Grandma Bett being outspoken in their opposition to The Believers, and Saint Bede in particular.

Gracie negotiates her way through ostracism at school, losing her best friend, losing her brother (when he is sent away to the safety of Queensland), the separation of her parents (“I wouldn’t have minded listening to Mum yelling and breaking things if only I could’ve heard the sound of Dad’s boots too”), and of course the horror of the children disappearing and then their funerals: “Grandma Bett said that no one’d felt like organising another funeral so they just followed the same programme [as for the last child]”.

The structure of the novel is great, with many plots woven seamlessly together, and Lane uses the device of seeding the bad things that are to come, with Gracie telling us the story retrospectively: “I feel terrible about that now, especially after what happened later.”  Gracie is pitch perfect in her concerns and priorities: “I didn’t really want another thing to worry about, what with Nigel being murdered, Dad living with Fat Frannie, Mum liking St Bede, and the angry red spots on my chin”.  And the other characters ring true too, especially Grandma Bett with her practical Catholicism: “Then we knelt and clasped our hands together like Grandma Bett did when praying for the children or Ethiopia or for the washing to dry.”

Gracie takes her Grandma’s and her Mum’s religion as it comes, being made to sing carols for Grandma Bett “It was bad enough being the girl who wore a second-hand school uniform without also being the girl who sang Christmas carols on the side of the road.” And going to The Believer services with her Mum: “Walking up the aisle was like walking into something out of a movie, but I couldn’t think what movie. Star Wars, maybe”.

Gracie’s Mum and Dad are dirt poor and distracted, but very human.  As too are the various idiosyncratic folk around the town – many of them falling under suspicion of being the serial killer.  The reader realises before Gracie and the others do who the actual murderer is, and all is resolved and explained – even that crazy River Picnic.  The narrative is funny and scary, and towards the end is very sad: “Laughing seemed a thing of the past.”

As Gracie looks back she isn’t without self-recrimination: “really, when I thought about it, I was pretty gutless”.  But of course, she wasn’t, she was an achingly self-conscious 11-year-old girl with fierce loyalties, a tissue thin outer shell, a crush on the boy next door and the feeling that the world rested on her shoulders.  Gracie’s characterisation is a wonderful achievement and the novel has a perfect ending!

All our secrets is a stand-out debut and has been shortlisted for Best First Novel in this year’s Ngaios. Highly recommended!