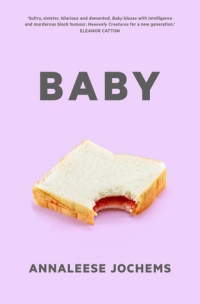 Cynthia, 21 but looks younger, thinks her dreams have come true when she takes off with her dog, her beautiful yoga instructor and her Dad’s money.  She buys a boat called Baby to live on off shore from beautiful Paihia, and cuts all ties with her friends and relations – what could go wrong?

Well quite a lot, quite quickly; Baby is told from Cynthia’s point of view and Cynthia’s point of view is informed mainly from reality TV, YouTube and online sex sites.  She is an unreliable narrator of her own life – fantasising constantly and getting pouty and churlish when the real world doesn’t conform.  As well as Anahera, the fitness instructor, there are three other significant characters in the novel, but we have no idea really who they are and what they are thinking – Cynthia’s perception of things being so self-obsessed.

Baby is quite mundanely horrific – Anahera’s fitness weights roll around above their heads inside the boat – an ominous noise that becomes more so when Gordon anchors them so the threat is still there but silent.  Gordon is a man they pick up, or are picked up by, on a nearby island – is he German?, a fake?, known to Anahera?, a threat?  All we have to go on is Cynthia’s warping thoughts.  The boat becomes a claustrophobic container of Cynthia’s psyche – within which she tells us of Anahera’s comings and goings (she is always swimming away and back), their daily routines, their childish diet and the annoying intrusions of those they invite in – a young boy from a Paihia school, Gordon, a man who lives on a nearby boat.

The psychological suspense in Baby arises from not knowing whether Cynthia’s fantasy is complete – is it all in Cynthia’s mind – or will her negative thoughts towards others be expressed as violent action?  It can go either way for quite some claustrophobic time.  You will have to read Baby to find out the answer!