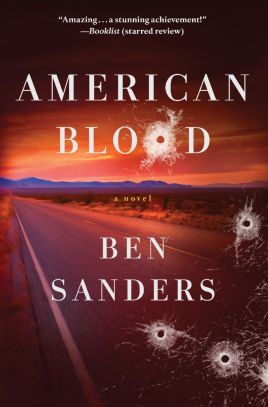 Want a good old American thriller with cops and killers with ice in their veins and a confusing line between right and wrong? – American Blood is for you, and it is written by Kiwi author Ben Sanders.  Sanders’ new character is an OCD ex undercover cop from New York in Witness Protection in New Mexico – but not playing by the rules – and even sort of keeping his name, Marshall.  The sighting in a newspaper of a young woman in a missing person case, who reminds Marshall of his disastrous past, compels him to get involved in the case – putting him the crosshairs of the hit man hired by New York gangsters who want him killed, and getting him involved with local drug dealers and low lifes.  But Marshall isn’t the only character we follow – there is Lauren Stone, an off duty cop trying to deal with her own personal tragedy; Troy Rojas, ex-army, ex-prison and current drug dealer; Lucas Cohen, the deputy marshal on the tail of Troy and his associates and the local witness protection contact; and Wayne Banister, the hitman from New York.  And all these characters swirl around and gradually wash up together.  And the good/bad thing is irrelevant – one of the most thrilling segments is when Rojas (a baddy) is sneaking around a house while his psychotic buddies are up to no good in the basement – and Wayne Banister is actually quite a nice guy – and Marshall racks up quite a body count.  Motive is a bit blurry and I would have liked more texture to Marshall’s character – but the action and hardware are meticulously described.  And wanting to find out more about Marshall can’t be a bad thing when I am sure we can look forward to more novels in the series.