Posted on October 9, 2015 by alysonebaker 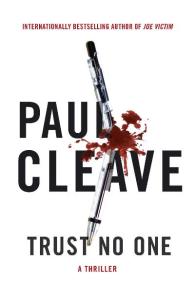 Paul Cleave’s Christchurch Noir thrillers are all set in a nightmare Christchurch of murder and mayhem.  Trust No One is too – but this time the nightmare is internalised in Jerry Grey – a thriller writer with early onset Alzheimer’s and a dark alter ego: his pseudonymous Henry Cutter.  Jerry’s story is told as third person narrative alternating with first person (through his madness journal written for his future self) and interspersed with second person interior narrative.  The novel starts with Jerry confessing to a murder that all around him insist is a fictitious murder from one of his thrillers.  Jerry in fact is living in a nursing home, from which he is a frequent absconder.  His murder journal starts filling in the back story, while the narrative moves us forward – but all is told through a disintegrating and fluctuating memory, which added to the various storytelling modes leads to a wonderfully complex psychological thriller.  Jerry’s increasing paranoia is matched with his increasing self-doubt – as even to himself he is an unreliable narrator.  The reader follows Jerry in being unsure of the motives of those around him – and flipping backwards and forwards concerning whether he is in fact a serial killer.  One thing is certain – people are being murdered – well almost certainly people are being murdered.  Trust No One plays with fact, fiction, guilt and innocence : “There is a world of difference, Jerry thinks, between making shit up and making shit happen”. Cleave has a great time writing about a thriller writer – “write what you know, and fake the rest”, and having Jerry break one of his own rules – “… the one thing he swore he would never do – he based a character on a real person … He turned what happened to her into a story.”  A roller coaster of a read – highly recommended to adrenaline readers.