Posted on October 3, 2015 by alysonebaker 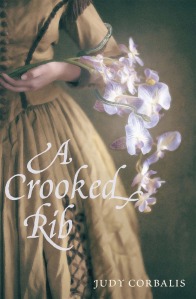 A Crooked Rib is part historical, part romance and part a treatise on the subjugation of women.  It is the story of fictitious Fanny, “sister” to the historical Eliza Lucy – who became the wife of Sir George Grey – and fictitious Makareta – based on the historical rumours of Grey having had a Maori mistress.  The novel has an odd structure – which I found quite jarring – but ultimately the pieces fall together to draw a picture of three women who turn to sorcery and subterfuge in societies where love and marriage have been politicised and “Woman is purely her husband’s chattel and he may do with her what he will.”  Society is influenced by its founding stories – or arguably the reverse – but those with stories of woman being created from the rib of a man and going on to be the cause of his downfall, or that of a woman who awaits all men at the gates to the underworld with her vagina full of the “hideous obsidian fangs of a barracuda”, are not likely to be societies kind to women.  The telling might be uneven but the historical events of the young colony of New Zealand are well researched and engagingly related – and we do have a rich and complex history.  The characters are well developed and often intriguing.  There is much discussion about what it means to be civilised, and a great questioning of what it means to belong.  What I was left with was the feeling that however pervasive culture might be there will always be those whose nature does not allow them to assimilate.  Definitely worth a read and a think.

This entry was posted in Book Review, Historical. Bookmark the permalink.