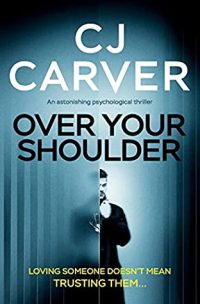 “Things were so topsy-turvy I was beginning to wonder if anyone could be taken at face value anymore”, Nick Ashdown’s world has hurtled off the rails. He was watching TV with his wife, Susie, when they saw a news item about a man acting heroically in the face of a lone-wolf shooter. But it wasn’t the possibility of random violence that had shaken Nick, it was the fact that the hero was his younger brother, Rob, who had died in a boating accident 12 years before.

Over your shoulder rockets along as we travel with Nick as he faces reveal after reveal about the past, and about his present, and faces the possibility that his little brother might not be a hero, but a murderer. Nick is so unprepared, so content with his life in the picturesque coastal village of Bosham. He is a graphic designer working not far from home, Susie does weekly commutes into London for her civil service job, his parents don’t live far away, and everyone knows him and his family down at their local.

The reader starts picking up clues along the way as we go on Nick’s journey, and we see things from Susie’s point of view as well as Nick’s. There is a great stereotype reversal in their relationship – Nick would like to have kids and become a stay-at-home dad, but Susie is ambitious, focussed on her career, and she is strong-willed: “I couldn’t imagine many wives letting their husbands continue what others might call a reckless undertaking.” Nick finds himself neck-deep in a world of drug smuggling, big money, chilling villains, possibly dodgy cops, and extreme violence.

Amidst Nick’s adjusting to this new and dangerous world, is his confusion and anger over Rob. Nick and his parents have grieved for him, Rob’s wife has re-married, his children have a new father. Through the book Nick is constantly taken back to the times when he and his little brother were growing up together: “I wanted to go sailing with him. Have a pint with him. Go walking along the shore, identifying the waders probing in the mud for shellfish and crabs, chatting about nothing in particular alongside the sound of curlews. I wanted to see my little brother and give him a hug. After punching him first, of course.”

Nick finds a strength and resilience he didn’t know he had, and he discovers one of his biggest weaknesses is his inability to lie effectively. And as the twists continue, even those readers who have picked up clues along the way will be surprised at the climax! The plotting is excellent, and the coda after the main reveal gives the novel much more substance than it would have had with just a ‘got ya’ ending, and the extra twist at the end keeps you thinking for quite a while after you have finished reading.

Another excellent thriller from C J Carver, have a read!