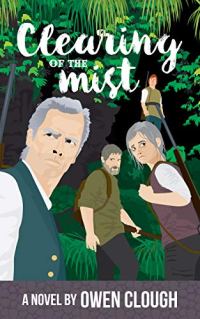 Clearing of the mist is the third part of Clough’s Whispers of the past trilogy. In the first part, best mates Bob, Shane, and Sam, get transported from 2014 to 1863 when they wander into a mist during a DOC pig-culling trip in Tongariro National Park. In the second part, Shadows of the mind, Bob, who has returned to ‘now’, and who has received a message from Shane that he is happily married in late 19th Century Aotearoa, starts to research what has happened to Sam. In this final instalment, we mainly follow Sam’s story from his own point of view, and in the process get an overview of a time when “The British Empire was at the height of its power … and had its nose in a lot of countries.”

Clearing of the mist starts with Bob filling the reader in on some of his research, which is like listening to a keen genealogist relating what they’ve learnt of their forebears, “This is pretty involved, so I hope you’re getting the drift.” In the 1860s, Sam was knocked unconscious during an affray in Auckland and regained consciousness on the HMS Esk, where he is called Lieutenant Samuel Mack, having no memory of who he is or where he is from. We know Sam married Bella, his nurse on board the Esk, and that he ended up becoming Lord Selkirk of Shadymore in the U.K. But Bob is stymied in his research by all mention of Lord and Lady Selkirk drying up around the end of the 19th Century.

The bulk of Clearing of the mist is told from Sam’s point of view, with the story occasionally interspersed with third person narrative. The reader learns of Sam’s story via a journal he keeps with the intention of getting it to Bob in the future. It is a tale of “The known world”, at the height of colonial sensibilities, where Sam is welcomed and assisted by Englishmen as he travels through Egypt, Rhodesia, and South Africa. His children are scattered through the Empire, and in the ‘new world’ of the United States. Sam has 21st Century views of many things, although initially not knowing why. He is egalitarian and a conservationist: “I am all for preserving wildlife, while the majority want to have a stuffed head on the wall.” Yet Sam is also an ex-soldier, and his story is full of derring-do. Whilst in Rhodesia there is an incident involving the Matabele (the Ndebele people of Zimbabwe) who we glimpse briefly and long to hear their story. But this is Sam’s story and he is injured, suffers a great tragedy, and falls into a deep depression. While taking a talking cure and aided by his having received a knock on the head, his memory starts coming back.

Sam meets folk from New Zealand while at a reception at the invite of Queen Victoria, and as the story progresses, these people aid in Sam’s recovery. At the reception he is also told of a scandal regarding the Prince of Wales, a great friend of the Lord of Shadymore, and Sam is asked to assist by protecting the woman at the heart of the scandal, which propels him into another adventure. Sam and his New Zealand friends decide to take Blanche, the wronged woman, to New Zealand, as Sam and his son have decided to try and return to ‘the present’ via the mist in what is now the Tongariro National Park. Blanche proves herself to be a woman more than ready to meet the 21st century. Their journey is beset by dangers from a group of low-life baddies, working under the direction of a secret arm of the British Government. Both the baddies and goodies have secret agents, so the journey to New Zealand, via Egypt, and from Auckland on to the mysterious site of the mist, is wall-to-wall excitement and danger.

Clearing of the mist is an old-fashioned romp, yet as I was reading it, I started to see it as a description of colonial expansion, and the conundrum of people living outside their own space (and time). Sam ponders the mysteries of time travel, he has lived in the U.K. for 30 years, the same amount of time he had lived before the time slip, but what is the ‘when’ he will arrive back to, and how long will have passed in the ‘present’? This echoes the old view of the ‘time slip’ between ‘home’ and the colonies. The sad scenes of departure are reminiscent of family members leaving for ‘ends of the earth’ even today, not knowing if they will ever see each other again. And the scenes of re-union reminiscent of those between people once close who have no idea of lives lived apart, yet still feeling familial and friendship bonds. And of course there is the total outrage of colonisation, from the casual mention of being “wrapped up like an Eskimo”, to the baddies’ use of the adjective ‘darkie’, and the staff at Shadymore meeting the M­āori leader Te Ruru Maniapoto: “Once they realised he was well spoken and not a savage, they relaxed.” There is the initially jarring ”upper-class English accent” of Peri, one of the Māori contingent. And Clough has Sam grasp only the revenge aspect of the complex Māori concept of ‘utu’, and hints at continuing cannibalism.

The Māori in the book are wise, fiercely loyal, and mysterious. As Blanche says of Te Ruru’s mother, Rita: she “smiles her secret smile, as though she sees my soul – in a nice way, of course.” The Māori know and are respectful of ‘the mist’, and there is a nice suggestion of true things which are interpreted by those not in the know as ‘myth.’ Sam recognises that as his people have brought dangers not only to the bush and the native wildlife, they have also brought danger to a unique relationship between a people and their land. Even those of the time recognise: “The Maori have been treated poorly, and land has been taken from them willy nilly.”

Clearing of the mist is an interesting read from lots of aspects, it is an adventure story, and a glimpse of colonialism with a slightly modern lens. The two time-slip eras are close enough to each other for the metaphor of colonial expansion to work, we read of Queen’s Wharf, the BNZ and Britomart Station, realising they are earlier manifestations of what springs to mind. When we eventually learn of the ongoing communication between the two times it is cleverly done, adding to the story of government oversight, engaging “a couple of random Maori”, explaining the sangfroid of the BNZ teller receiving a parcel in 1893 to be delivered in 2020, all echoing the improving communication between ‘home’ and the colonies over the 30 years of Sam’s experience. There are links between characters throughout the story, becoming quite complex with the involvement of time travel, and working within time, e.g. one of the ‘baddies’ is linked to Sam in his 19th Century history.

The historical references in Clearing of the mist seem pretty accurate, although New Zealanders did not start calling themselves Kiwis till the 1st World War, and Sam’s accent wouldn’t have been matched by the colonials he first met in the 1860s. Clough has obviously had fun writing the book, and there may even be mention of a music-teacher forebear of his in the story. I read it as an e-book, which had some odd spacing and struggled with macrons, either using a circumflex or missing them out altogether, presumably hard copy editions would not have these issues. The tale spans 1863 to 2026 and is an interesting end to a fun trilogy.

This entry was posted in Book Review, Historical. Bookmark the permalink.