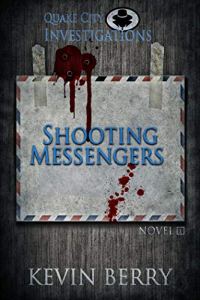 PI Danny Ashford lives in Quake City with his cat, Torquemada.  It is a city the government and most services have abandoned, where crime is rampant and where aftershocks continue, and where the remaining police force is “undermanned and under-brained.”  When journalist Deepa Banwait arrives in Danny’s office asking him to help her hone her investigative journalism skills, offering a postal worker shot on his rounds as a case to start with, Danny reluctantly agrees.

Quake City is an alternate history Christchurch, with the suburbs, roads, eateries and newspapers all re-named: Crumbledon, Crumblo Street, getting quakeaways from Coffee and Cheesequake, The Richter Mail …  All parts of the city, from the Red Zone to the ganglands to the affluent neighbourhoods, are crumbling, cars are down sink holes, school mums love their SUVs because they pass gently over the ubiquitous potholes.  And in the crumbling police force, the incompetent Inspector O’Toole sees serial killers everywhere – but as the body count rises, with the victims all linked by their delivering things, it might just be that O’Toole is right.

Danny and Deepa have a compelling relationship, they met on a previous case when Deepa saved Danny’s life.  Danny starts out a bit tetchy with having to work with a partner, but his discomfort starts to fade when he finds he’s looking forward to seeing Deepa smile.  Danny has an ex-wife and a feisty daughter, Lizzie on the scene, but increasingly he finds he is liking being with Deepa, and when it becomes obvious that she too is ‘delivering’ news, they both get very intent on finding the killer.

There are things about Quake City that hinder the investigation: security cameras don’t work, narrowing down suspects by looking for violent tendencies and mental illness doesn’t narrow things down much, and Danny’s initial profiling skills are way off.  But on the other hand: speed cameras don’t work, so Danny and Deepa can zip about, and as all the skilled cops have abandoned the city, O’Toole is happy to have Danny and Deepa help out.  The pair have extraordinary access to information, both illegally and due to the police not being that tight on network security.

The tension builds along with the body count in Shooting messengers and the resolve is climactic. There is a noir-ish vibe to the book, main players who don’t mind acting a bit dodgy, and lots of murder.  But all this is nicely undercut by the almost cartoon-like descriptions of the city, by Danny driving a Suzuki Swift, and by his self-deprecating comments.  I would have liked to see more of Danny’s daughter, “I want to be a private dick like you” Lizzie; she fades out, as does Deepa’s background story, and that of Danny’s parents.  The initial attitude to mental illness is quite superficial, as was Danny’s apparent understanding of it, but then despite his ‘Imposter Syndrome’, he mysteriously becomes a bit of an expert.  Danny and Deepa are great characters and these problems with the narrative let them down a bit.  But the DI and journalist will be back solving crimes in further Quake City investigations, and I will be interested in following their progress.