Wife after Wife by Olivia Hayfield – 2020 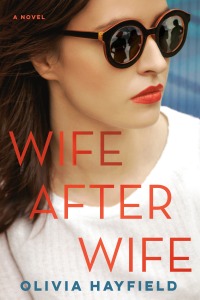 Harry Rose is a super-rich, super-privileged British businessman.  Having inherited his fast-track rise to his position as head of the Rose Corporation, he has encountered setbacks but has almost always had things his own way, and he has been living the life of royalty.  We first meet Harry in 2018 looking out his office window, his personal world about to crumble – but looking back over his life and deciding his conscious is clear.  But the windows are literally rose-tinted …

Wife after wife is a clever and engaging re-telling of the romantic career of Henry VIII, prefaced with an amusing cast of characters – a nice amuse-bouche before savouring the rich story.  In the mid-1980s Harry marries his pregnant girlfriend Katie Paragon, over 30 years later in 2018 he eventually must either face up to his failings or lose his 6th wife, Clare Barr.  In between we read of his serial dalliances and marriages, against a backdrop of personal tragedies, commercial triumphs and some dodgy dealings.

His empire is based on celebrity magazines and eventually TV channels and online media.  He is a mix of caution – not initially being convinced that “personal computers would ever take off” – and bold moves, employing people with an in on the zeitgeist. He steers the company through near recessions, the GFC, #metoo and Brexit.  And as his business weathers the ups and downs of the commercial world, he slides though his various relationships with the smugness and self-righteousness of white male privilege.

“He didn’t really do alone”, Harry needs people and needs them to prioritise him at the centre of their lives.  Cassandra, Katie’s friend advises Katie to pander to him: “I know from bitter experience what happens when men feel ignored.”  But when Katie’s depression becomes too much for Harry, he finds solace in Merry, a fling for him, the world to her.  And then he meets her sister, Ana Lyebon and “… Merry’s flame had gone out, and now she was just another girl fighting to be noticed.”

Ana is smart, beautiful and irresistibly not interested – “there really was nothing like the thrill of the chase.”  But one by one the relationships fail, due to Harry’s self-obsession and lack of empathy, and his ability to always make himself the victim, as Katie points out: “You always try to do the right thing. You twist things until you can justify your actions.”  Janette the secretary provides the attention he craves when Ana becomes too independent, an online relationship keeps him amused when he is lonely after Janette.  Caitlyn is younger, from a lower-class, irresistible – and hers is perhaps the most tragic story.  And finally, there is Clare Barr, who, when Merry and other spurned characters return for revenge, gives Harry the ultimatum to come to terms with his part in the demise of all his relationships or be alone.

“You know what they’re like. Idiot boys”, there is an acceptance of the bad behaviour in men that is absolutely not tolerated in women, there is the assumption that women’s success is either due to ‘casting couch’ behaviour or purely from the indulgence of men – these misogynist assumptions travel through the decades with Harry and his mates.  As does the North – South snobbery, and the droit du seigneur assumptions: “now he could start the serious business of wearing her down, until, like every woman he’d ever wanted, she’d be his.”

“He loved them all, Eliza. Unfortunately for them” Terri, one of Harry’s editors and often the voice of reason, tells Eliza.  Harry is well portrayed as a charismatic figure, not at all one-dimensional.  There are lots of allusions to the historical Henry: ongoing battles with weight, Harry’s corporate portrait depicting him in a ‘power stance’, injuring his leg in an accident etc., etc.  There is lots of fun with the Henry VIII themed presents, pubs and photo shoots – such as when Ana feels queasy when she stands next to the execution memorial in the Tower of London.

Wife after wife is a great idea well executed.  All the characters are cleverly re-imagined; Ana’s daughter Eliza being a brilliant redhead with a bright future, and Katie’s daughter Maria being a dour devout Catholic, the greasy lawyer Tom Cranwell, Janette’s love of needlework … The women are all interesting and active agents, and end up supportive of one another, “… when women need someone to rely on, it’s never a man.”  Oddly enough this romp is also a great history lesson – I kept looking up the historical figures to find the connections with their modern versions – Anne of Cleves (Anki from Cleveland) is particularly evocatively done.

Wife after wife is also a very moving read as you are faced with the frustrations and tragedies of the women and their children.  Olivia Hayfield is the pen name of children’s author Sue Copsey, and Wife after wife is her first adult novel.  Hopefully there will be many more, it is altogether a great read, so give it a go!