The Julian Calendar by William Henry – 2018

Posted on September 21, 2019 by alysonebaker 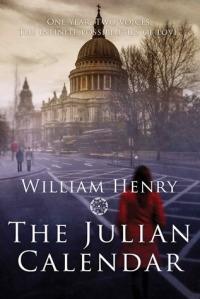 A year in the life of a young man, Daniel Jamieson, as he recovers from a love affair, befriends an older man, and has various other romantic experiences.

Daniel had a ‘love of my life’ relationship with Bridget, an Australian nurse, when they were both living in England.  Bridget returned to Australia, and Daniel to New Zealand, heartbroken.  Their relationship continues throughout the book, via letters and via Daniel’s imagination.

Daniel decides to exorcise his haunted thoughts by returning to the U.K., he is a freelance photojournalist and free to move around.  He agrees to visit Julian Marriot, an uncle of a friend from varsity.  Julian is in is early sixties, gay, a retired editor.  He and Daniel begin a deep platonic friendship that becomes the basis for both men to consider their other relationships, past and present.

Julian introduces Daniel to music, relatively well-known romantic pieces that most readers would know.  He is a gentle funny sad man; a gay man in the 1990s, not completely ‘out’, losing friends to AIDS.  He is attracted to Daniel, and to Daniel’s attraction to women.  Julian is struggling to find romantic companionship, though he does have some loyal friends, and an on-again-off-again relationship with Stefan, a man struggling with his sexual orientation.

Daniel has a couple of relationships though the year; with Sarah, a woman he meets though a short-term temping job, who is as obscure as Bridget in her inner turmoil.  And finally, with Ruth, another New Zealander he coverts in a bookshop and later bumps into.  And of course, there is the ongoing problem of Bridget – the cause of much discussion about love and longing with Julian.

The book’s narrative alternates between Daniel and Julian, and you see incidents from both their points of view.  The book is an homage to the actual relationship between the author and an older man, and is a fine description of the time, and of the complexities of male relationships.  I understand why they were missing, but I longed for some inclusion of the inner thoughts of the women – who are all obscurely complicated, a bit clingy, ‘surprisingly’ accepting.

The Julian Calendar is a genteel read – a little frustrating at times, a tad preachy regarding the state of the world, but full of nostalgia and quite poignant.