Posted on January 6, 2019 by alysonebaker 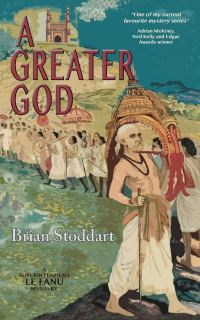 Settlement, fending off multiple job offers while trying to work out who is on a killing spree targeting Muslims, and which romantic relationship to pursue.

This is the fourth outing for Le Fanu, and the first I have read.  The setting is riveting; the beginning of the end of the Raj, with political posturing becoming more and more divisive.  Le Fanu’s boss Jepson is an old style incompetent racist colonial to the point of insanity, and there is a range of colonial attitudes in the characters, right through to the liberal Le Fanu, who is not unblemished in his attitudes to others; “We Indians are always ready to help, sir” quips one of his staff, Assistant Superintendent Mohammad Habibullah (Habi).

Along with Habi, Le Fanu has head of Special Branch, Jackson Caldicott, in his corner.  Habi and Caldicott are relieved to have Le Fanu back, given the increasingly erratic behaviour of Jepson and the spate of Muslim killings. But Le Fanu has a lot on his mind, the Governor and Chief Secretary of the Government of Madras (Le Fanu supporters) are both moving on, and want to get rid of Jepson and replace him with Le Fanu; the Chief of Police and Military for the Nizam of Hyderabad wants him to work for them, and Le Fanu was offered a position in Penang at the end of his last adventure.

To make things even more complicated for Le Fanu, his ex-fiancée, Roisin McPhedran, enters his life again (in Hyderabad), just when he has started a new relationship with Jenlin Koh (in Penang). Le Fanu blunders through the novel on not much sleep, lots of alcohol and the blokeish support of his mates.  He is a far from perfect character – suffering from PTSD post action in Mesopotamia, and quite neglectful of those close to him and whose admiration for him is unstinting.  Stoddart manages to painlessly cram an awful lot of historical detail into the novel, and there is some light relief by way of every man and his dog knowing all Le Fanu’s business (due to most of them running informants) and the under-stress banter of the men.

I was in India a few year’s ago and met a young Muslim man in Rajasthan who passed himself off as a Christian for safety reasons, so was intrigued by the historical emergence of militant Hindu nationalism, and the conflicts between Hindu and Muslim, which are far from over.  The novel has great descriptions of the bustle of Indian cities, and the (even then) widening gap between urban rich and urban poor.

The only frustration I had with the novel was the female voices being either off stage, mediated by men, or fleeting.  There are some great female characters, but we never really get to meet them – and more importantly they never get to meet each other!  Which I suppose is quite accurate for the ruling British and Indian culture of the time, but frustrating for the reader now.  There isn’t really a mystery to solve either, it is quite clear who (in general terms) is on a murder spree, but the narrowing down of the targets, and the conflicts about when and how to act to not exacerbate the situation, are gripping.