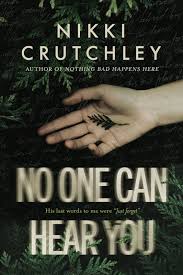 Zoe is back in her home town for the funeral of her estranged mother, who has apparently been suffering from memory loss and who has left odd notes around indicating that young women have been disappearing from the town.  It is only when Faith, a woman with whom Zoe was briefly friends at high school, returns for another funeral, that Zoe starts putting all the pieces of the puzzle together.  And the two women set out to find the truth and save the missing women.

Crutchley has plonked her novel firmly into the debate about the depiction of women as victims in mystery/thrillers, and she has done so while making her strong characters female and putting all the male characters under suspicion.  The plotting is complex and very clever – the reader does start to suspect every man and worry for every woman in the novel.  I read the book while New Zealand was reacting to the murder of yet another young woman – so the argument about whether such novels depict reality was moot.

Zoe is a great character, leaving her cushy job teaching at a high school in Auckland, in response to the school’s white male sense of entitlement, she returns to Crawton with ambivalent thoughts about her mother’s apparent suicide.  We find out about her far-from-ideal childhood, nicely contrasted with that of her best friend, Alex, the ‘boy next door’, and feel for her as she discovers her mother was idolised by many in the town, to the extent that some of them had been covering up her memory lapses.

We also follow the ghastly experiences of the taken women, both historic and current.  Faith is working at a restaurant in Wellington, still traumatised by her abduction; Aroha is a young woman living in Crawton with a useless father and missing Lillian, Zoe’s mother – the only person she could talk to about her problems; and Megan had been homeless when she arrived in Crawton, where Lillian sorted her out with a job at the Crawton Tavern.  All women find themselves affected by the conspiracy around them.  There are some good male characters too – all for one reason or another falling under the reader’s suspicion, sometimes just because they seem so nice and supportive!

The title No one can hear you refers to the women being held captive in remote locations, but also to the authorities being deaf to complaints laid when the complainants are female, getting a bit forgetful, being from a marginalised group, have been in trouble in the past, etc. etc. etc.  The novel is not a pleasant read, but certainly gripping, and truly ‘thrilling’ in parts, and it is a satisfying read; just when I was thinking the conspiracy was a bit unbelievable, a brief comment had me convinced.  All in all, another great crime novel from Nikki Crutchley.

This entry was posted in #yeahnoir. Bookmark the permalink.