The Man Who Would Not See by Rajorshi Chakraborti – 2018 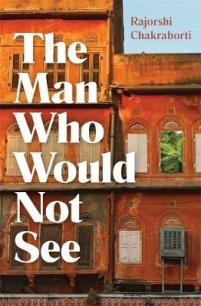 Abhay is a writer and primary caregiver to his daughter, Mira.  He lives a comfortable life in Wellington with his wife, Lena – “… simply the daily opportunity to play. That’s one of the biggest things I owe New Zealand …”  But Abhay is haunted by an incident from his childhood in India, where he and his half-brother, Ashim, got lost when they wandered away from their father at a train station. As a result of the incident, Ashim was sent away to boarding school and his full sister, Aranya, opted to move with him, leaving Abhay feeling guilty for causing the break-up of his family.

When the two brothers meet up at a wedding in Calcutta 27 years later, Abhay is overjoyed to get a chance to reconcile with his brother, and invites Ashim and his daughter, Tulti, to visit him in New Zealand for Christmas, at Abhay’s expense. Setting up a wonderfully rich opportunity to explore cultural differences, childhood guilt, the reinvention of history, and the once-removed life of a writer.

Apart from the opening sequence of the childhood incident, The man who would not see is written in the first person and in the past tense, alternating between Abhay and Lena.  Ashim comes across as calculating and devious in the narrative, but it becomes clear we might not have the most reliable of narrators – there are some murky suggestions about Abhay’s past, and Lena naturally wants to protect her family as she gets more and more suspicious of Ashim and his hold over Abhay.

The novel plays with childhood guilt, and with where a person’s loyalties and attentions should lie after they start a new life away from their birth families, or away from their birth country.  How much hold do families have over a person, and should those connections ever trump concerns for immediate loved ones? The answers to these questions are seen through the lens of intercultural marriage and the hazy memories of childhood.

The characterisation in the novel is great, Abhay’s character in particular is finely drawn – perhaps as there is much in his history that is drawn from the author’s background.  He is a wonderful mixture of cultural biases and expectations, and as an author is always observing as well as doing, to the extent that he can decide what to say then observe himself saying something quite other. He is also infuriating at times in his martyred narrative of sacrifice with no acknowledgement of his advantages or the adjustments that others have made on his behalf.

Another great character in the novel is the boys’ sister Aranya, who we never ‘meet’, and as Lena says: “of whom no one in her family could draw me a clear picture.”  We find out enough intriguing snippets about Aranya’s story that I found myself creating a narrative for her and really wanting to meet her, giving the novel real depth.  Mira is another person who we get to know in an oblique way, but who feels very present as we read.

The man who would not see is a suspenseful read, as the past tense allows for Abhay and Lena to know and hint at the bad things that will happen as they tell the story.  There are many unexpected turns, especially when Abhay goes to Calcutta to discover the details of what happened to Aranya. It is an engrossing read that raises interesting questions about loyalty and identity in an increasingly globalised world. The only concern I had was with the resolution, which is probably due to my own cultural biases and expectations!  Read this novel and see what you think.