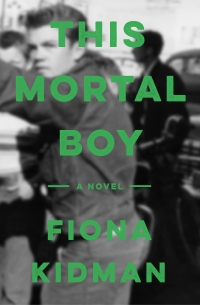 Albert Black has been accused of murder, and the death penalty stands, “Will goodness and mercy prevail?” – alas no, not in 1950s New Zealand, not with the shadow of the Second World War affecting how politicians make decisions, and not with the prejudicial Mazengarb Report being delivered to every household in the country, spreading moral panic.

Albert Black is a young Ulsterman who is sent off to New Zealand in 1953, when he is 18: “It was meant to be a big adventure.”  A handsome and friendly young man.  He makes a friend on board the ship, a 23-year-old Liverpudlian called Peter.  On the same voyage are several child migrants, those sent alone to New Zealand to get them out of the way, many of them ending up living hard childhoods as farm labourers.

Albert isn’t a child migrant, but he has been sent out of the way – his father thinking he is too loved by his Mum, and that a chance to start a new life is just what he needs.  Albert and Peter find work together for a while, eventually moving in with a solo Mum and her children in the Hutt Valley.

Albert becomes known as Paddy, and he is very homesick, just wanting to get home to Belfast.  There is a bit of excitement around the Hutt – in fact it has been reports of promiscuous behaviour in Lower Hutt that has been one of the reasons given for the inquiry into juvenile delinquency that has resulted in the Mazengarb Report.  But Wellington doesn’t hold much promise for raising enough money to buy passage back to Ireland, so Paddy leaves for Auckland.

Paddy washes up as a sole occupant in lodgings in Wellesley St, gets various short-term jobs, and hangs out with the bodgies and widgies at the Ye Olde Barn café.  He might not be able to afford the clothes, but he is part of a generation wanting to look different, dance different and be different from the dull era they have been born into.  Paddy makes friends, has girlfriends, falls in love, keeps in touch with Peter and the woman who took him in in the Hutt, and of course with his Mum back ‘home’.

Then Paddy meets another young man living under a different name from that he was given.  Johnny McBride “… arrived in New Zealand as a child migrant, something he didn’t choose”, he is an insecure young man who comes across as a bully.  He and Paddy are at logger heads from the start, and one clash in the Ye Olde Barn café results in the death of Johnny McBride.

This Mortal Boy reads like a Greek Tragedy, we know what is going to happen:  Alfred Black was the second to last person put to death at the hands of the State in New Zealand.  We read about him, his circle, his parents and younger brother in Ireland, with the knowledge of poor Alfred’s fate.  And this is what makes it such a beautiful and poignant read.

Kidman’s depiction of the time is lush; the vomit of the six o’clock swill, the Edwardian swish of the bodgies’ outfits, the early dreams of later strip club mogul Rainton Hastie, the pulse of Auckland – except on a Sunday when “Queen Street [was] so quiet you could shoot a gun straight down the middle and nobody would come running.”  She exquisitely draws Paddy making bad choices and saying crazy things and knowing it but being too young to listen to his own voice of reason.

We follow Paddy into Mt Eden Prison, listen in on the guilt wracked Superintendent Horace Haywood, who disagrees with the death penalty, and his off-sider Des Ball, himself guilty of appalling spousal abuse, of which his neighbours know but don’t report.  This latter is one of the many contradictions and injustices Kidman highlights: outrage at teenage abusive behaviour – silence over abuse inside marriage; a post-war society where “Young men are expected to be warriors, to be pioneers and soldiers, so brave of heart” – those not privileged condemned for behaving like warriors; a young man condemned to death for an accident – another left to carry on in the community for a much worse crime, etc., etc.

The saddest contradiction is the sending of young children to a distant country for a fresh start – then ostracising them for being ‘different’.  The scenes in which the jury discuss Paddy’s case highlight all the prejudices of the time, the jury itself (all men) split neatly along class lines. In the end the verdict is brought in after only an hour and forty minutes deliberations, most of which was on other factors than the evidence against Paddy, after all: “He speaks like a bog-trotter.”

There is an obvious miscarriage of justice, including an appalling leak of information to the jurors via the press before a verdict has been reached, advising what the judge has already decided about Paddy’s fate.  And Kidman describes the earnest work of Ralph Hanan to get the verdict overturned at the highest levels.  And the barrister Oliver Buchanan trying to do the same at the Court level, realising too late that crucial evidence has not been presented.

Back in Belfast, Kathleen, Paddy’s Mum, is doing all she can do via her appeals to local politicians, New Zealand politicians, and even the Queen.  But all the pleading and appeals are in vain, because the decision to take Paddy’s life has nothing to do with him or his actions, it is all to do with power and warped principles – sharply delineated in the scene with Paddy being interviewed by a psychiatrist to see if he is “a suitable candidate for the hangman’s noose.”

“In the meantime, there is the small matter of a man’s life to be decided” – The story of This mortal boy unfolds in non-chronological pieces – in prison, in court, various episodes in Paddy’s life, in Belfast with his family.  But it is seamlessly stitched together, heartbreakingly sad at the end and just a wonderful piece of New Zealand historical fiction.

This entry was posted in #yeahnoir, Book Review, Historical. Bookmark the permalink.