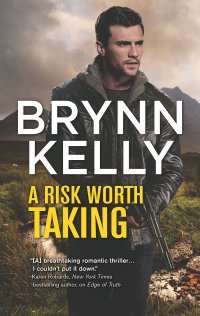 A risk worth taking is the latest roller coaster read in Brynn Kelly’s Legionnaires series.  A year has passed since Edge of truth, and Samira Desta is in hiding after her whistle-blower fiancé, Latif, has been murdered.  Latif used to work in a company owned by the series’ arch villain, Senator Hyland, and he passed on information concerning Hyland’s nefarious deeds to Tess Newell, the tele-journalist who featured in Edge of truth.  Hyland is also the father of socialite Laura Hyland, who hired Holly Ryan to be her body-double in the first in the series, Deception Island.

What Holly, Tess and Samira have in common is a pairing up with members of a platoon of French Foreign Legionnaires.  Holly was kidnapped (to prevent his son being harmed) by Rafe Angelito.  Tess was being held under threat of online execution when legionnaire Flynn was thrown in to the execution threat to enrage another country. And Samira had a one-night stand with legionnaire medic Jamie Armstrong at the end of Edge of truth, and he comes to assist her when her cover is blown when she is hiding out in a remote cottage in Tuscany at the beginning of A risk worth taking.

Samira is a computer whiz, she builds impenetrable online security systems, then tries to hack them to test their strength.  She is Ethiopian and the daughter of globe-trotting diplomats, she is not like the fearless Holly or Tess, she wants a quiet life and has panic attacks.  Jamie is an ex-neurologist and surgeon, he is all quick repartee on the outside and as cool as steel in an emergency.  But there’s a reason Jamie is no longer a surgeon, no longer socialises with his confreres, and is averse to entering into anything that looks like a long-term commitment.

Once Samira is flushed out of her Tuscan hideout, she flees to London, where Jamie catches up with her.  They are relentlessly pursued by Hyland’s goons, and we find out about Samira and Jamie through their exploits – e.g. Jamie when there is a sequence in a London hospital where he once worked, Samira when she knows about diplomat protocol.  When they discover that Hyland is headed for Edinburgh they head north, Jamie, the Scotsman, travelling back to some bad memories.

Samira can’t believe what is happening: “This was not her life. She’d dropped through a wormhole into someone else’s world, someone else’s skin” – nor what she and Jamie are planning to do: “Everyday people going to everyday Sunday places – markets, churches, Christmas shopping, visiting a friend to collect evidence that would take down the future American president …”

Samira and Jamie have the usual sizzle between them that we have come to expect from the other books in the series, and again this is used to highlight the vulnerabilities and insecurities of the characters: Jamie all hard legionnaire, but a mess inside, Samira a sophisticated geek but capable of extraordinary bravery and action when required.  And other characters from the previous two installments play roles, appearing like old acquaintances and reminding us of the earlier stories.

Kelly’s pacing is great, her apparent facility with geek-speak impressive and her characters all have histories and depth.  Hyland is a bit of a caricature of a villain, but his extreme corruption creates the dangerous scenarios our feisty women and their staunch legionnaires thrive on.  This novel could be read as a stand-alone, but is probably more fun if you have read the previous two.