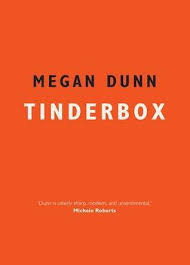 A memoir, and a book about writing a book, about the future of books, about women in books, about a movie of a book, about selling books – Tinderbox is all of these and is wonderful!  Dunn takes us though her experiences of trying to write a novel (based on Fahrenheit 451: “a searing feminist rewrite of Bradbury’s classic”) while living through a marriage breakup, and her time working for the Borders book chain, both in the UK and in New Zealand, which in turn is going down the economic gurgler.

Tinderbox is funny and sad – Dunn is in the doldrums most of the time, waiting for her marriage to end, for her job to disappear, for her novel to complete itself, for the end of the world as we know it: “Bradbury was prescient but not quite so prescient as to predict global warming, recycling and the imminent extinction of the bumble bee.”  She takes a job at Borders thinking it will help her writing, but the mass production and marketing of merchandise has the opposite effect: “I know what temperature books burn at. Half price.”

Dunn is well aware how much of a literary snob she is – she is happy watching Big Brother and America’s Next Top Model on TV, but when it comes to books she rails against the flooding of the book market with “cheap banality” – at one point sitting on the loo “She sighed, there were so many books in the world.  Too many” and used a page of Picoult’s My Sister’s Keeper as toilet paper.  She has it in for poor Picoult: “Jodi writes books the way other people bake muffins.”

Tinderbox is full of references to heat and fire: Dunn describes her laptop as “my tinderbox”, after serving a customer: “Clearly the girl with the dragon tattoo was smoking”, “My anger erupted into flames” etc, etc.  Dunn must have been delighted that Amazon’s e-book reader is branded a Kindle!  And she puts the beginning of the literary apocalypse with the arrival of the Kindle: but the apocalypse isn’t the “easy to imagine you would resist” Bradbury book burning, it is “A future where books [are] mass marketed and turned into multi-million dollar films and merchandise.”

Writing to a NaNoWriMo word-count-per-day deadline, and under the threat of closure of the Borders stores, Dunn becomes obsessed with Truffaut’s movie version of Fahrenheit 451.  Truffaut was the proposer of the auteur theory of filmmaking – that the director is the author of the ‘work’ – and Dunn sympathises with the problems Truffaut encountered during the making of Fahrenheit 451, and also ponders his treatment of women characters, as she does Bradbury’s “The Mildred in my head just didn’t sound that stupid.”  She also thinks about the serendipity of creation – Truffaut not getting his ideal cast, Bradbury darting up to the stacks of the UCLA Library for random quotes, and Dunn trolling through websites and online fora for bits to put in her novel: “Anything to help my word count.”

The mass NaNoWriMo experience makes Dunn lazy, knowing she should be “providing unique salient details that would bring the world of my novel to life. Unfortunately I couldn’t be bothered.”  And Tinderbox has some pretty clunky puns in it, she almost longingly wonders if “Maybe in the future it was also illegal to write.”  And when copyright problems loom for her adaptation of Bradbury’s novel, she opts instead to tell the story of her attempts to write it – “‘Yes, it is a bit meta,’ I reached up and touched my face, cheek burning. Time for another apology. ‘That’s the last thing we need,’ I said.”

In Tinderbox, Dunn, as we all do, struggles a bit to find the positive – “Yet I like to think I stand for freedom of speech. At least I stand in line for it.”  At one point she admires a poem by Matthew Arnold, “The poem described the withdrawal of religious faith but I believed in the power of literature and the tide had gone out on that too.”  She applauds the flattening line on the sale of e-books “They are, after all, still a bit shit.”  And it was fitting that I read Tinderbox in a Kindle app – and it was a bit shit, with lots of typos and layout errors.  But I loved it, and don’t believe we have all been reduced to “… grazing the written word”.  Tinderbox may not have ended up “a searing feminist rewrite of Bradbury’s classic”, but it is a flaming good read!