Posted on January 6, 2018 by alysonebaker 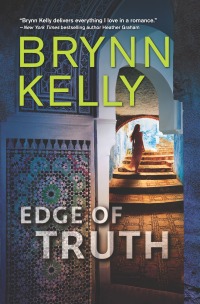 Edge of truth is another adrenaline roller coaster ride from Brynn Kelly, the author who brought us the fantastic mash-up of thriller/romance that was Deception Island.  Edge of truth is a story of international conspiracy and war-mongering, played out in the Horn of Africa.  Tess Newell is a well -known tele-journalist, unfortunately more known for a high-profile romance break-up than for her journalism.  But Tess has uncovered a huge story of corruption and conspiracy, and is desperate to get the story out before the world is plunged into a major conflict – but she has been captured by the conspirators.

Tess is being held in a dungeon in an unknown location, and is under threat of an online streamed execution.  Her captives have decided to spice up the execution by introducing a second victim, a French soldier, adding pathos to the killings, as well as drawing another country into the conflict.  What they didn’t count on was the French soldier being a legionnaire, Flynn, who appeared briefly in Deception Island as a confrère of one of the main characters, Rafe Angelito.  Flynn, like Rafe a hunk with a tragic back-story and trust issues, decides to help Tess get her story out, despite her wanting him to leave her once they escape – as she is horrified that others have died trying to help her.

Tess and Flynn ricochet from danger to more danger.  The size of the operation working against Tess means Flynn has to use all his training and instincts to keep them safe. And of course, along the way the physical attraction between the two builds – and that on top of the adrenaline rush from being in minefields, in the sights of heavy weaponry, and from not knowing who they can trust, all adds to a pretty giddy ride.  The two characters are a good match, with Tess being a good strong player, and the narrative point of view swaps between the two.  The heightened action allows you to just roll with the more unlikely scenarios, and also accept the slight repetitiveness of some of the dialogue.

Edge of truth is a great adventure read, the conspiracy, although pretty mind-blowing, is actually quite believable given how whacky our political world has become.  And the novel deals a lot with journalistic integrity, and also personal motivation, whatever your role in war might be – soldier, journalist, materiel supplier.  As with Deception Island, we learn a lot about the main characters and why they might have difficulties trusting those around them.  Rafe and his crew also make an appearance, as do some of Tess’ colleagues, so the plotting has a nice build of both action and cast.  And add to that the wonderful location of Harar, Ethiopia, and you have a luscious read.

I understand Kelly has another volume on the way, this one dealing with two of the secondary characters in this novel – yippee!