Painted is a creepy slow burn piece of horror writing, putting scenarios in your head that play out long after you have finished reading. 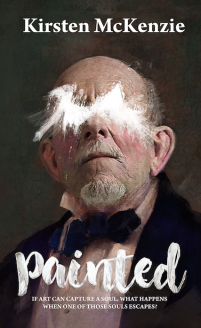 At the start of the novel, you find out an artist has passed away and left specific instructions as to the disposal of his vast art collection – instructions which his lawyer has no intention of following. So, when an appraisal company is engaged and a young art appraiser, Anita, is the first of a team to arrive at the remote country pile, the reader already has amorphous concerns for her well-being.

Anita is haunted by a traumatic incident in her past, and is hyper-sensitive to male intentions. When the estate’s lawyer arrives to oversee her work, Anita is more concerned with his presence than with the odd happenings of which the reader is slowly becoming aware.  For the characters, the Gothic setting and winter storms make strange noises and moving objects easy to explain away.  And when they become aware of peculiar things happening to some of the paintings in the house, their first reaction is to accuse each other.

When more appraisers arrive, and people start to go missing, the action and the suspicions of the characters start to ramp up.  Meanwhile, the reader is trying to put all the pieces of the puzzle together, including the little they learn of past goings on in the house, information given by a neighbouring farmer.  Added to this are some disturbing developments in the house that are far from supernatural.

McKenzie plays with three familiar tropes: belief that an image of a person captures something of their essence, that the eyes are the windows to the soul – and the common rituals of ‘opening of the eyes’ of statuary, and the thought that some personal items can hold power over the owner.  These familiar elements make the supernatural plot of Painted feel graspable.  And as the reader has access to the goings on of both the natural and supernatural characters, the story is nicely filled in.  And the ending not expected at all.  A good spooky read.

1 Response to Painted by Kirsten McKenzie – 2017