The Suicide Club by Sarah Quigley – 2017

Posted on September 11, 2017 by alysonebaker 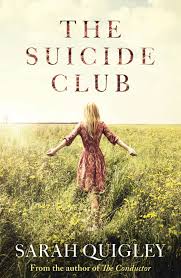 Three young people, one mistakenly named, two self-named, have all experienced childhood trauma.  As a result they feel abandoned, are haunted by horrific memories, or experience hyper-sensitivity due to early injuries.  All three are extremely gifted: either with beauty, with inventiveness, or with imagination.  All suffer from depression and tend towards self-harm, from milder forms of self-abuse through to suicide.

Bright is a successful author, Lace, a stand-up comedian so beautiful that even inanimate objects lean towards her, and Gibby is a brilliant inventor (who has invented things we all use daily) but is still in his first job; delivering newspapers in the inner city.  The city is imaginary –  un-named and in the north of England.  All three young people end up participating in a voluntary therapeutic course – when they attend it is held in Bavaria, but it pops up in different places and is always called The Palace.

Despite its title and the claim on the back cover that it “examines the last taboo in our society”, I don’t think The Suicide Club deals with youth suicide at all.  It certainly describes depression, and in a very moving way.  But the three young people are ethereal and their experiences so extreme – and that, along with the frequent charming meanderings into meta-fiction, takes this book away from a serious discussion of the appalling incidence and tragedy of youth suicide, towards a much lighter fanciful read.

The writing is magical and captivating:

Halfway down the banker’s building, as she is scrutinising the city with the sharpened perception of the recently fucked, she gives a start.  Far away, outlined against a huge glowing billboard, she sees a tiny body falling.  Somersaulting, twisting in slow motion so that, for a moment, the body and the lift she’s in seem to be descending at the same speed. Through heavy air, separated by some distance, they swim downwards in parallel lines, and their connection is only broken when other buildings come between them.

And the writing is also quite timeless: we are in the age of the Internet and cell-phones, but Bright, Lace and Gibby quote Hemingway and Fitzgerald, and lug books and notebooks around.  The ‘at a distance’ writing, inviting the reader to note aspects of the narrative, veers off into farce occasionally, emphasising clumsiness and chaos, and at one point goes into full blown slapstick – which I found quite jarring.

The story moves from the traumatised trio and their coping (or not) mechanisms, into a love triangle once they meet, re-meet, at The Palace.  I thought I was going to love this novel when I was first reading it, but ended up puzzled by it.  I really appreciated much of the beautiful writing, but was left with a feeling that the initial trajectory of the novel had gone seriously off course.  Have a read and see what you think.