Posted on September 8, 2017 by alysonebaker 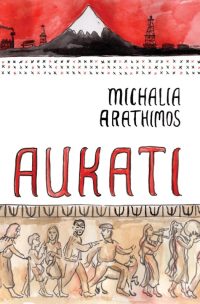 What I loved about this book was its uncompromising life-like messiness; things don’t go as planned, there are long periods in the doldrums, sex is sometimes not that great, something happens and suddenly one of the characters finds himself in a world he doesn’t understand: “he’d fallen out of the kind of story he knew and into a new one entirely”.

Regardless of the specifics of this book, we can all relate to its underlying themes of hopelessness and confusion in turbulent times, and in the face of bland authority.  It might even seem dystopic at times, until one recalls the 2007 police raids carried out under the Terrorism Suppression Act, or the fact that our Deputy Prime Minister recently said some New Zealanders have fewer human rights than others.

Autaki means border or boundary – and the story is that of protest against the forced alienation of tribal land, and the subsequent abuse of that land.  A group of protesters travels to a Māori community to help the fight against a fracking operation.  The operation is on ancestral land that was taken from the tribe long ago – the tribe is already disinherited – but the current land use is endangering the water, land and crops of the community, and the stability of the whole region.  The boundary of the title is geographic, but also cultural, gender, class …

The protesters are a jumbled lot – some very experienced, some with Police records, some new to protest, some suspected of being undercover Police, and all totally conflicted about not only the scope of the protest (environmental, historical?) but also about the nature and extent of the protest (legal, direct action?).

Woven between the endless meetings and re-drawings of plans are the stories of what becomes a temporary community.  The underpinning story for the newcomers is revolution; there are open relationships, railing at current injustices, wanting to blow stuff up, wanting to save the world.  The story for the inhabitants is one of a continuation of the degradation of their land, the annoyance at non-Māori speaking on their behalf but them having to push non-Māori in front of the media so their concerns are not seen as ‘just’ indigenous, the fear of doing anything that will once again bring reprisals that will traumatise their children, make further inroads into their lives, possibly even kill them.

The book is framed around two main characters.  Isaiah is part Māori and returning to his home marae – he finds there are expectations of his role there, which he struggles with, as he has grown up in the city and doesn’t speak Te Reo.  Haunted by the lack of knowledge of his own past, and the fate of his father, Isaiah is transformed through the novel.  Alexia is a law student about to sit her bar exams, she is fleeing from her Greek family’s expectations of her moving in with her grandmother after the death of her grandad.  She looks a little bit Māori and is forced to sing a waiata when the outsiders are welcomed onto the marae – Pokarekare ana is the only one she knows.  She is an outsider who is gradually accepted, and who realises how much she has changed when late in the novel she observes her fellow protesters outside a court:

“… with their tino rangatiratanga placards, and the activists with their patches, with Polly, Te Kahurangi, Matiu and Rangi, for whom the city was nothing and their poisoned corner of land everything.  During her placement she would have studied them curiously, possibly taking notes on behalf of a senior lawyer … She would have mentioned them in passing to her friends: the case that gripped the nation, etc.  But they would have remained cut-outs.”

Alexia also experiences synaesthesia – in her case seeing music as colours.  The ebbing and flowing of her synaesthetic experiences run almost like a barometer through the novel – echoing the intensity of Alexis’ feeling and the changes to the land.  The colours sometimes emerge for her from the sounds of the bush, linking her to the stories of the local patupaiarehe, fairy-like beings who can protect you as well as lead you astray.  So fitting, as the hopelessness and confusion of the novel stems in large part from uncertainty around whom the characters can trust, or what they can have faith in.  A challenging read but I loved it.