Posted on August 5, 2017 by alysonebaker

What a charming book!  Catching the last tram is a romance that follows the usual 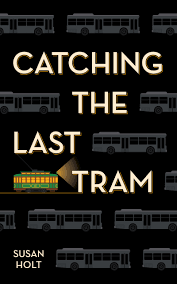 romantic arc – but not at all in a usual way.  Beth is a librarian who has moved into a new part of town, she is lonely and on the lookout for a fella – her last few relationships having not ended well.  Beth finds a likely prospect on her commuter tram, but her fixation on behaving in a way that will give her the best chance of pursuing a relationship, means she misses some very odd details about the tram and its regulars.  The reader is suspicious from the outset, which leads to a fun read as you try to work out exactly what might be going on.  Beth’s world is modern, but the style of writing is slightly not – until the cell phones came out I was thinking we were possibly in the 1950s, and the processes at Beth’s Library seem a bit dated as well – all of which added to the mystery.  I don’t want to give anything away, as the enjoyment of the book is in not knowing, but it gets pretty darn scary in a number of places.  Holt includes the theme of the evils of bullying, and the value of friendship, and a quite tongue in cheek reference to an environment where money trumps true love.  I still had a few questions at the end, but nothing that got in the way of this being a delightful read.

2 Responses to Catching the Last Tram by Susan Holt – 2017