Skin of Tattoos by Christina Hoag – 2016 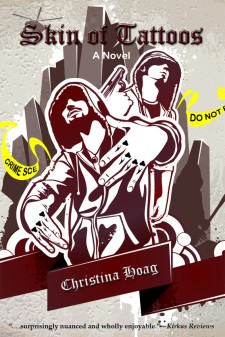 When I first started reading this book, I was thinking there are only so many stories you can tell – and that this was the one about the guy that gets out of prison, wants to go straight, can’t due to societal stigma and intolerance, so he gets back into the criminal life big time and things do not go well.  The story was being told by ‘the guy’, in this case Mags (Magdeleno) a Salvadoran LA gangbanger. I was enjoying his narrative style – salted with patois that was exotic, but also familiar from all the movies and TV programmes I have seen about LA gangs.  But then, as well as just cruising through the book, I started to become totally engrossed in Mags’ world; the characters Mags engages with are flawed and have agendas, which make them untrustworthy and far from predictable, and Mags himself is a complex character who makes some very bad decisions about what and what not to do.  Mags’ gang is the Cyco Lokos, and while he has been locked up, the ‘shotcaller’ of the gang, Chivas, has also been imprisoned.  Mags was Chivas’ lieutenant, but that place has been taken by Rico – the guy who set Mags up to take his wrap for illegal firearm possession – and with Chivas locked up, Rico is calling the shots.  Although angry at this, Mags has decided to go straight, not wanting to go back inside and also wanting to grow his relationship with Paloma, his best friend’s sister.  But he gets pushed back into gang action – and into confrontation with Rico.  And there is a comfort in this: “Revenge is the regaining of control. There’s nothing so empowering, so elating.”  But truly terrible things occur as Mags tries to set things straight and get his homies back on track, and he starts to realise that the gang code gets more flexible the higher you go up ranks.  If everyone is out for themselves, who can you ever totally trust to be on your side?  Even within his family, his alcoholic father, his hotshot firefighter brother, his Catholic turned Pentecostal Mother, and his sisters, one of whom has got involved with a banger from a rival gang – who will see him for who he is and not just see the gang tattoos that scream out what he is.  The tattoos are a great metaphor “They were a part of me, but not the whole of me”, they are a comfort as they give Mags identity, but they are a burden as they don’t allow others to want to see who he is and to what he might aspire.  Along Mags’ journey, as well as the fear and violence, there are some lovely moments: the family dinner where Mags felt “No matter what had happened in the past, I belonged at that table”, and when Mags’ clica crew sat around telling stories about a dead homeboy “til the wind blew through our clothes and the sea turned nimbus grey”.  Skin of tattoos is full of the inevitability of lost lives; of those who can’t escape the deeply worn tracks of their predecessors, even those “moving up the food chain who thought they were leaving the ghetto behind when they arrived in the San Fernando suburbs, but they just bought the ghetto with them”.  The sympathy Hoag has for her unsympathetic characters is effective – whenever someone does something awful you find yourself thinking not that they are bad to the bone, but that something awful must have happened to them for this to be their reality.  Mags even manages to conjure up sympathy for the despicable Rico: “For an instant I felt sorry for Rico.  Just an instant.”  And it’s those instants that have you rooting for Mags and worrying about him – so, have a read and get to know him.  This is a great debut novel from Hoag, who is an LA-based Kiwi writer.

1 Response to Skin of Tattoos by Christina Hoag – 2016