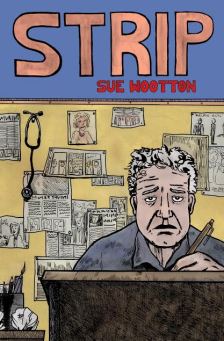 I picked this novel up, saw the cover and glimpsed at the blurb, and started to read what I thought would be a humorous story of a man who decides to try a second career as a comic strip writer – it isn’t.  As I started to read I then thought it was an exploration of intra-family relationships – it’s not really that either.  Strip is an exploration of love and loyalty, and of quite frankly a lot of bad decision making on the way to trying to manipulate the world to make it ideal for those you love.  Harvey is a G.P. who would like to try being a full-time cartoonist.  Isobel is a museum administrator who is saddened that she and Harvey have not been able to conceive a child.  When Harvey’s cartoonist dreams start becoming reality and Isobel’s career is taking off, an offer of a baby for adoption threatens to both undermine and fulfill their lives.  A teaser chapter at the beginning indicates that something is going to go seriously awry in Harvey and Isobel’s lives – and as we move from episode to episode through time, there are plenty of opportunities for disaster.  But Harvey and Isobel both believe in carrying on and braving out tragedy – so it is not the events of the novel themselves that take the book on its odd course, but Harvey’s decisions and actions at various times; decisions and actions which the reader knows will not go unanswered.  It is not a preachy book – you know why Harvey does what he does – and even though you might disagree at many points, you do understand.  It captures very well the different ways that individuals might react to events.  For example, at various stages, for various reasons, Harvey becomes stuck inside – inside his house or in a hospital room: “But, outside?  The air out there … he was no longer acclimatized. … ‘Outside’ would mean leaving the capsule and setting foot on an alien planet. …He would need a helmet and a full-body suit.”  Whereas Isobel finds solace in the outside, in her job, in nature, and has space to ruminate about “Man-mammal … clawless, fangless, unwinged clumsy animals. We bipedal apes with such heavy heads”.  It is a moving and surprising read – just when you think you have a sense of the ‘main point’ of the book it goes off in another direction.  I found this a bit disconcerting at times – as it gives the book an odd shape – but perhaps the structure is supposed to be reminiscent of a series of comic strips?  Or just makes the point that our lives are messy and unpredictable?  Anyway, it is definitely worth a read.