The Quiet Spectacular by Laurence Fearnley – 2016 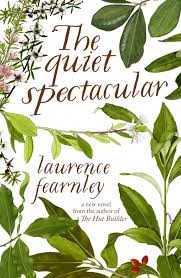 A character in The Quiet Spectacular declares that the literary establishment considers men to be the north on the compass and “…it’s only by sending the whole compass completely haywire that anyone other than Western men get a look-in.”  And the book, if not breaking any literary boundaries, does concentrate solely on female concerns and actions.  Loretta is a school librarian going through a bit of a crisis.  Her greatest sense of danger comes from a gang of teenage girls who visit her library, and from her husband casually mentioning every now and again that he wants to ditch his job and live off her part-time earnings.  She once charmingly decided to re-name the male geographic names of the South Island with the names of remarkable, but often unheard-of, women – and thinking of these women she worries that she is of the generation who are “Too young to belong to the solo yachtsmen and moon explorers, too old to identify with the backpackers, the round-the-world mountain-bikers or base-jumpers.”  And as a friend points out: “… women or, rather, menopausal women, aren’t really expected to do dangerous things, are they?”  So Loretta is almost resigned to “The cow is my spirit animal”, and “I’m no lady when I change lanes” when a desire to recapture her joy as a child observing birds in her single member bird-watching club takes her walking on the nearby wetlands.  Young Chance also ends up on the wetlands, she attends the school where Loretta works and due to a misunderstanding has to produce a taxidermy trinket in order to ask Loretta to suggest a book she might read – her attempt to escape her mother’s tyrannical book-reading regime where “a good reader was obligated to approach a text with the same energy that a [racing] driver negotiated a track”.  Chance, who through a male misunderstanding is named Porsche, finds herself isolated from her peers at school as well as from her mainly male family on their goat farm.  Her only potential ally, her mother, is frustrated with her life having gone straight from school into marriage, and takes her frustrations out on Chance.  Even the books her mother makes her read provides no outlet for Chance: “Her mother’s books touched on every type of life except their own.”  A third woman is Riva, once a successful business woman, now the owner and developer of the wetlands.  Riva is coming to the end of the permitted mourning period for her younger sister and she must come up with a spectacular way to acknowledge the end of her mourning.  So The Quiet Spectacular is the story of these three women who, I suspect like most women, feel they don’t quite fit the world they were born into.  I was a little disappointed at the end – I was still mentally thinking of dangers writ large – but I think that was missing the point.  The saving of wetlands, the taking charge of your own projects, the negotiations of everyday life and the willingness to enter into friendships are all quietly spectacular.