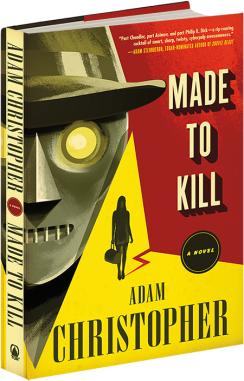 A mash-up of sci-fi and noir, Made to Kill is set in a stereotypical US where the Hollywood star system rules, Kennedy is in office, the enemy is ‘the Reds’, guy wear tight white t-shirts and gals hang out in ice cream parlours with soda fountains, and PIs wait in their small offices waiting for the beginning of a plot to walk through the door.  And the mash-up? Christopher’s PI Ray Electromatic is a robot – the last robot after all his kind were disassembled after the populace got too creeped out by their too-human likeness, especially those of the populace whose jobs were taken by the new form of labour.  Ray has got his PI creds and his office manager is a computer called Ada – who communicates verbally with Ray whilst images of her swirl like cigarette smoke in his circuits.  Ada is essential – although Ray has the emotional memories of his creator, the late Professor Thornton, he only has the capacity for remembering 24 hours of activity before his memory tape fills up and must be replaced.  Ray’s memory of cases depends on Ada filling him in – and now that Ada has moved Ray into the hit-man business due to her profit drive, he also depends on Ada to tell him who he has killed.  All good – and gets better when the expected siren walks into the office with a triple whammy of the request for a PI job to look for a lost person along with a hitman request to kill him when found, topped off with a bag full of gold bullion.  And the plot unfolds in a nice noir-ish way, if not a bit too heavy handed on the simile front.  We are taken at whirlwind pace into an unfolding Soviet conspiracy to infiltrate the US – using the US’ own most powerful agency – Hollywood.  And time is ticking through to the denouement involving a movie premier at Grauman’s Chinese Theatre and the iconic Hollywood sign.  All good fun apart from the fact that the parody style doesn’t allow for either the true grit of noir nor the scientific rigour of good sci-fi – the latter elements of the plot, apart from Ray himself, are ludicrous and push the book into farce.  Made to Kill is a great idea and is the first in a trilogy to feature Ray Electromatic, maybe the next two will be more the homage to Raymond Chandler Christopher intends for his series.