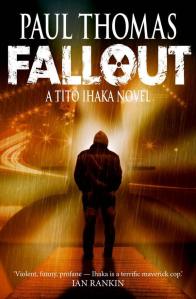 I didn’t read the original Tito Ihaka books, written in the 90s – but did read his comeback title Death on Demand in 2012.  Fallout is the next installment and finds Detective Sergeant Ihaka working two cases, one very personal and one a cold case that has haunted his boss Finbar McGrail for 25 years.  Ihaka is given information suggesting his father, a trade unionist, might not have died of natural causes, and McGrail gets a possible breakthrough in the solving of the murder of a 17 year old girl at a 1987 election night party.  Both cases end up having threads in common, as does a private job the disgraced ex colleague of Ihaka’s Johan Van Roon is given, chasing down a political power-broker who disappeared the same year as the election party.  The plot is clever and includes political machinations around New Zealand’s nuclear free stance and resulting exclusion of US warships, as well as the connections between the Soviet Union and the New Zealand Trade Union Movement at the time.  I am warming to Ihaka as a character and will certainly read more of his crusade against pomposity and bureaucracy.  I did find the resolution of the mystery a little unsatisfying, but really enjoyed the setting of  New Zealand times and places.