The Beat of the Pendulum by Catherine Chidgey – 2017

Catherine Chidgey recorded and transcribed a year of her life, and using just those found 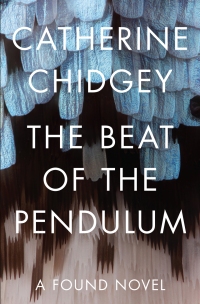 words – from conversations, from the Internet, from TV and movies – wrote The beat of the pendulum.   The title comes from a Proust quote, where he described novelists as ‘wildly accelerating the beat of the pendulum’.  There is an actual pendulum in Chidgey’s novel, it is of the old style that needs adjusting occasionally for it to keep time accurately, and the year of the novel – 2016 – had to have a second added to make it a full year.  Time may be adjusted for accuracy, but it is inexorable.

In 2016, the year of the novel, Chidgey’s daughter was gaining speech and a personality, while her mother, Pat, was starting a decline into living with dementia.  It was a year when Chidgey and her husband, Alan, were constantly considering where their family were going to live, should they move or stay in Ngaruawahia, where is the best place to create daguerreotypes?  It was a year of bureaucratic change at the institution where Chidgey teaches creating writing.  It was the year her previous novel The wish child was out for critical assessment, the year she considered bidding on a Byron mourning ring.  A year she was beset with various ailments, injuries and food intolerances, a year of cats. And a year in which she battled with the Internet, her answerphone and her GPS navigation system: “You have reached your destination.  No I haven’t.”

Is The beat of the pendulum a novel?  Her dialog and narrative is found, her structure is given – days and months of the year.  Chunks of narrative are from machines, ‘Recalculating route.’  ‘Unlike. Unfollow. Unfriend.’  ‘Would you like to access your set-up options?’ But as she tells her creative writing class (in the context of another project): ‘I think the craft of it lies in that editing process, looking at it with an analytical eye and seeing how you can rearrange the raw material to come up with something original.’  And The beat of the pendulum is refreshingly original – and a wonderfully engrossing read.

It is also a brutally honest read, Chidgey has nightmares about receiving bad reviews of her writing, but freely criticises the works of other authors.  She doesn’t edit out comments that she wonders are appropriate: ‘The Holocaust on ice.  Is that too much, or is that okay?’  And she takes us to her various therapist and doctors’ appointments.  We are told the story of Alice, her daughter, and all the complicated family ties arising from that, plus the complexity of her and Alan’s family networks.  Much of this is repeated due to her Mum needing to have things repeated with her failing memory.  And here is where the heart of this novel is for me: Chidgey’s relationship with her Mum.

Many readers of this novel will empathise with having a young child, some of those with having their partners being the main caregiver.  Many will know what it is like to live with food allergies or chronic illness.  There will be writers who read this novel and know what it is to have insecurities as a writer, and a few of those will know what it is like to be a successful writer, and they will share the wish that the New Zealand media gave accolades to authors returning from book fairs and festivals the way they greet sportsmen (usually men) returning in triumph.  But the one thing almost all readers will have experienced, is a relationship with a parent or parental figure.  And increasingly, a great many of these will have experienced that person falling into the confusing world of dementia, and eventually having to help them into residential care.

Another creative writing lesson: ‘If you’re writing a character based on a real-life figure, you have to be sensitive.’ The relationship between mother and daughter is so gently revealed in The beat of the pendulum.  The conversations, the shared jokes and shared memories.  The failed attempts at April Fools.  The patience at having to repeat and repeat and repeat. And the heart-breaking scenes of sorting through Pat’s belongings, asking her if she wants various items:  ‘Yes, I’m never going to be going out with bags now.’

The cruelty of a disease that steals memories.  In another creative writing class Chidgey talks of writing being an example of the ubiquitous graffiti ‘I was here’ – and that the value of writing is in reaching an audience, in moving someone, because ‘It proves that someone’s noticed our little scratch on the wall’.  I am sure there will be those who will resist The beat of the pendulum, ‘Siri, what is creative non-fiction? I didn’t quite get that’.  But I am also sure that most readers will find this novel delightful.  Parts are laugh out loud funny.  Who can’t love a book where a women’s baby daughter gives her a bilingual Proust for her birthday?  Or where a whole paragraph is online auction feedback?

The beat of the pendulum is the documenting of a year of memories, maybe a way for the author to resist time’s passing as her baby grew into a girl starting to create her own memories.  A way of capturing those of her mother’s memories lost to dementia.  A way of both accelerating and slowing that beat of the pendulum.  Whatever the reason she did it, it has resulted in a great novel.

This entry was posted in Uncategorized. Bookmark the permalink.